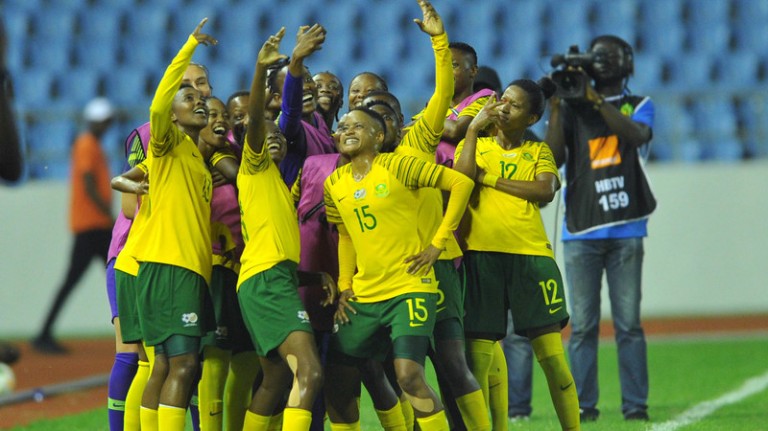 The South African Women National team left it all on the pitch against China in their second game at the FIFA Women’s World Cup, but still came up short, falling 1-0 in a game that many had predicted their mauling. There is no doubt that the Banyana Banyana have come as long way in the past couple of years, but from what we have seen so far, there is still some work to be done. Here are some observations on the things they did right, and the things that either went wrong, or needs to be stopped or added…

The central defensive pair of Janine van Wyk and Noko Matlou dealt well with the crosses, and Lebogang Ramalepe was almost majestic on the right side of defense. She kept an eagle eye on Gu Yashan, and found time to go on forward rampaging runs to support the attack. On the few occasions that she was caught out, there was enough cover to minimize the damage.

They worked hard as a team, and showed excellent fitness. The popular saying is that a chain is only strong as its weakest link. This Banyana team, like it did at the Africa Cup of Nations for Women, showed no weak link; a testament to the good work done by Desiree Ellis. Every one of the players she had on the pitch – either as starter or reserve, gave their all. They worked for each other. Then, as the clock wound down and defeat (and elimination) stared them in the face, they found an extra gear and pressurized China. The Asians are the ones with the reputation of working tirelessly for 90 minutes at the Women’s World Cup, Banyana joined that company with this display.

However, the team may need to develop its own identity, separate from what is fashionable because:

They looked ill at ease playing out of defense. They move the ball around well enough, and looked solid covering spaces; but they didn’t look comfortable passing the ball out of defense. And given the frightening, speedy, weapon they have in Thembi Kgatlana, maybe springing her early, before the defense of the opponents set, would have worked better.

Plus, (that policy of) playing the ball out of defense meant that Jan van Wyk had to also do it…and her balls out of defense are usually poor. While she is an excellent leader and defender, she may be more suited to either booting recovered balls out or finding her closest team mate, if that option is available. Her second (misplaced) pass out of defense ended up back in the net. Those mistakes may go unnoticed in Africa, but get punished at that level

Then, Banyana may need to find an inventive midfield player or two. The current team is well drilled, but they need a game changer in midfield. Someone that can turn the game on its head, like Lydia Monyepao or Veronica Phewa. The goals of Kgatlana brings to mind the exploits of Jo-Anne Solomon, so it can be argued that while South Africa has produced well drilled players and some excellent strikers, exceptional midfield talents like Phewa and Monyepao have been rare. And that is what they need, to get over the hump.

No matter what happens to the Banyana Banyana in the game against Germany, the progress they have made is clear. Now, they must take the lessons of France, go back home and get working on how to make a return to the world stage in four years, a better team.