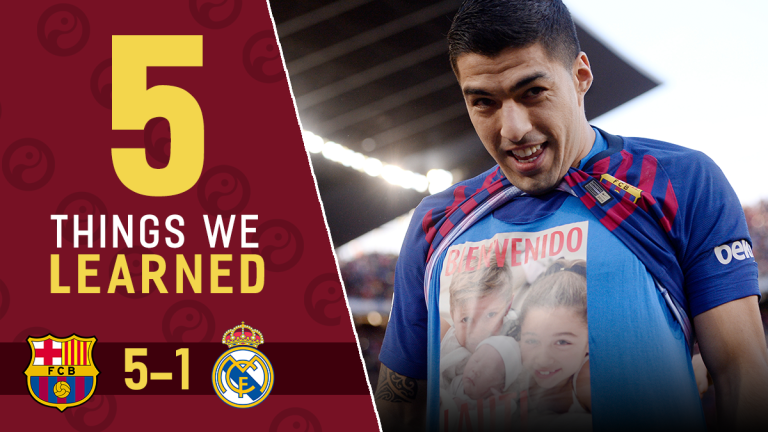 Barcelona put up a five star performance to defeat their eternal rival, Real Madrid 5-1 at the Camp Nou stadium on Sunday, to remain top of the La Liga table and pile more pressure on Julen Lopetegui.

Luis Suarez stepped up in the absence of Lionel Messi. The Uruguayan has come under lots of criticism this season with his inability to score goals. He’s missed lots of clear cut chances, but on a day when team captain Lionel Messi was out injured, Suarez stepped up to become the hero by scoring a hatrick of goals. He could have scored much more, hitting the woodwork with a lovely half volley with the outside of his boot and was also denied by the keeper. Suarez kept the Madrid defenders on their toes for all 90 minutes.

The new look Barcelona…No more Tiki-Taka. In an article on Barcelona’s new style, we said, the Spanish champions don’t play the tiki-taka anymore. It was obvious in this match, as they focused more on winning. They took Madrid on the break most times. The counter attacking football is really working for them. With the pace of Jordi Alba down the left, he was a handful for Nacho. All their goals came from the break. The first two from a switch in play from Alba, the goals in the second half were also when they caught Madrid on the break after it looked like the capital club would find an equalizer.

Ernesto Valverde’s tactical switch. The manager has come under scrutiny this season for his tactics, and in game management, but on the day when it mattered most, his tactical masterpiece won it for Barcelona. After the restart, Madrid was all over the hosts, and were close to equalizing. Modric hit the upright, but Valverde made a tactical switch, taking off Rafinha and pushing Sergi Roberto forward. That was the turning point in the game.

He also brought on Ouseman Dembele, when Madrid’s fullbacks were dashing forward. Dembele made them pay, and finally brought on Arturo Vidal to shut things up in the middle, and that paid off with the Chilean scoring the 5th goal for Barcelona.

Barcelona took their chances. All it takes to win a football match is to use the chances. That is exactly what the Blaugrana did. In all 90 minutes, Real Madrid had more shots at goal, but the Catalans were more productive with their shots, producing more shots on target, and scoring more goals. Unlike Madrid’s striker missing and hitting shots off target, Barcelona accurately placed their shots, Madrid will have their goalkeeper to thank for making some great saves, especially the saves to deny Arthur in the first half and Suarez in the second half.

Barcelona now have a sold squad depth. The Spanish champions have always had a great first 11, but their sub bench has always been below average. This term however, they can boast of solid substitute players. When Madrid were pilling the pressure on Barca, Valverde put faith on his reserve players. Nelson Semedo thwarted Madrid’s attack down the left. Dembele and Vidal also contributed – Dembele, an assist and Vidal, a goal.

Aside the players who came on, Summer signing, Malcom was also an unused substitute,  Munir El Haddad, who played 66 La Liga games on loan in the last two seasons was also on the bench. When star man, Lionel Messi returns, one of those players in the starting lineup will fall to the bench.

The strength they had in reserve gave them lots of options to pick from.