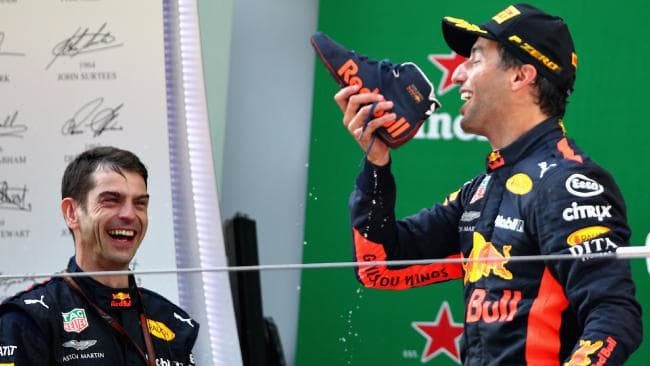 The Halo talk and its obstruction of the driver had died after Australia.

Everyone was looking up to Sebastian Vettel making it three wins out of three in Shanghai or Lewis Hamilton finally coming alive this season with a win. Most had predicted a Ferrari 1-2 after their blistering qualifying pace. Some F1 fans wanted to see if lightning would strike twice for Pierre Gasly after his Bahrain heroics. Team Red Bull Racing was never even thought of to make the podium. Besides, one of the bulls required a total engine rebuild after FP3 and was lucky to eke out a lap with three minutes remaining in Q1. Red Bull once again had a reliability issue. The season was shaping up to be a fight between The Prancing Horse versus the Silver Arrows…

The Australian charged from sixth to win the 2018 Chinese Grand Prix overtaking Kimi Raikkonen, team-mate Max Verstappen, Hamilton, Vettel and finally Valtteri Bottas after gaining from a safety car deployment. Just like Vettel and “The Ferrari Replicas”, Daniel Ricciardo was, conspiracy theorists would say, assisted by the coming together of their sister cars, the Toro Rosso pair of Brendon Hartley and Gasly on lap 31 which forced a safety car to be deployed. Their rivals had already pitted before the safety car and stayed on mediums while both bulls pitted for fresh, soft tyres. The gamble was worth it as both cars started surging up the field, with Daniel behind Max before the hot-headed Dutchman blew his chance of victory, running off-track in an attempt to overtake Hamilton and later colliding with Vettel, picking up a 10-second penalty. The Australian made light work of the cars up front, diving inside Bottas into turn 4 and forcing the Finn to give up with 12 laps to go.

A week ago, Daniel was out after a lap due to a mechanical issue, which was now becoming a common sight for Team Red Bull Racing with their reliability issues. The weekend was started just like the previous weekend ended but it ended with the Australian all smiles after an action-packed race, his sixth career win, ending Vettel’s run and giving us all his trademark ‘Shoey’ celebration. He doesn’t seem to win boring races anyway.

Daniel Ricciardo looked to be the team’s number two driver whenever both cars are on different strategies, and it hurts him. It is a similar scenario to what Vettel sufered in the German’s last season with Red Bull as Ricciardo was given seemingly better strategies in races. The 28-year old is in his last season of his contract with Red Bull. If given a car with a potential to win races, he would be challenging for the podium on race days and could possibly stay with Red Bull. If not, he’s definitely going to land a Ferrari or Mercedes drive someday if not immediately.

Red Bull has to make Ricciardo its No. 1 driver (of course teams deny they have a No. 1 driver). Max Verstappen is in his fourth season in Formula 1 but still makes school-boy errors due to his feisty driving, though entertaining, but sometimes unnecessary. Even his father Jos Verstappen admits his son has to think more after spinning Vettel. Ricciardo is a more composed, matured driver taking well-calculated risks when needed. Lots of F1 fans believed he would have made a serious attempt to overtake Vettel in Bahrain if he were in Bottas’ position towards the end of that race. He also believed so. That’s how good he is. If it were Max, he most likely would have crashed into Vettel, considering his form this season.

Finally, Daniel has to be careful with the team he would join if he decides to quit Red Bull as the top two teams seemingly have their No. 1 drivers. A character like Hamilton would not play second fiddle to anyone, and Vettel would not want a repeat of his last season at Red Bull, worse still, the same driver. Daniel don’t look like he’s going to entertain the idea of being sacrificed for a team-mate the way Team Ferrari tried to destroy Kimi Raikkonen’s race for Seb’s sake either!

One thing is certain: Red Bull and Ricciardo have come to the 2018 F1 Season Party!